When LOLT selected Gautam as an Anando beneficiary way back in 2011, little did the team know that LOLT would give this neglected little child from a low-income family in Mantha, Jalna District a mighty dream to chase and the courage to pursue it till it was realised. With parents working as farm labourers and two younger sisters in the family, it was very difficult for Gautam to dream big or devote time for his dreams. That’s when LOLT intervened to support this industrious boy to complete his education.


Only a year into our Anando programme, Gautam got a chance to dream big - joining the Indian Armed Forces. From then onwards, there was no looking back. There was nothing that could deter him from the path of chasing his dreams. At LOLT, he received material as well as emotional support through persistent motivation and goal-driven guidance to pursue his dream. Different activities and workshops organised at our centers further helped groom his personality. After getting through the SSC exam with flying colours, Gautam went on to pursue his higher education in the field of Humanities and passed the HSC exam with distinction.


All through, Gautam was preparing for his Armed Forces exam and appeared for the same the first time, in 2012. However, he couldn’t get through the exam. But instead of being dis-heartened, he courageously and passionately took to the journey towards his dream once again, with even greater determination and focus, and the single-minded aim of cracking the exams.


It was a memorable moment for Gautam and entire LOLT family when he cleared the Armed Forces exams in 2015 and got the opportunity to become a part of Indian Army. Gautam also completed his graduation in Humanities during the same time. Currently, he is posted in Uttar Pradesh as a “Buddy” and is earning Rs. 27,000 per month. Recently in March 2018, he got married, constructed his own small house in UP, and is now supporting his wife to complete her graduation. LOLT couldn’t have been more proud of Gautam and his achievements. 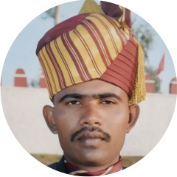